First thoughts were to actually title this `T.I, starts brawl With Floyd Over Tiny Actin Like A Thot´, but we’re being #modest out of respect for Tip. Just hours ago in Vegas at Fat Burger’s bar shit got real. Tiny (Tip`s #BM) & her homie was perhaps doin some charity or what have you for an event for Mayweather. The thing about this that caused eyebrows to raise was how Thotiana, i meant Tiny was so unprofessionally caring herself thotty/ groupie like sources reveals!

T.I., happened to also be in Vegas for his own protocol business ventures. He got word of the fuckery & let his heart cloud his judgment & swung towards Mayweather which lead to their (T.I x Floyd’s) camp to rumble!
Chairs were thrown s punches were also. Visual of the fuckery is posted below! 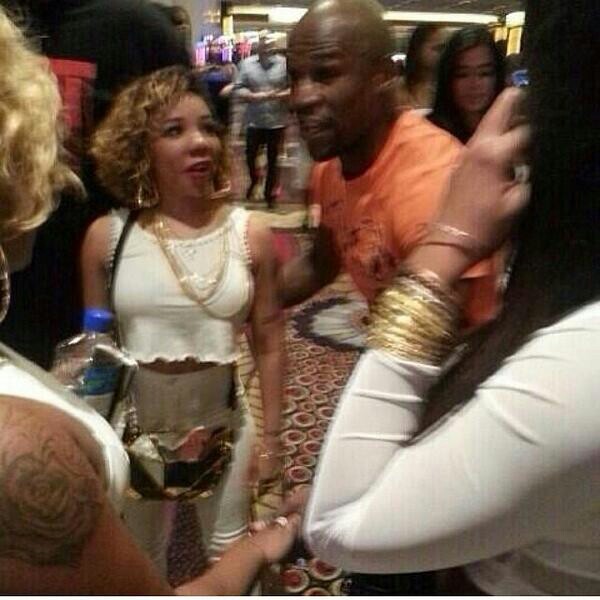 Ion kno if it’s just me or wut…but the look on Tiny face tho #lol looks as if she knows she is starting drama!! Maybe just maybe, she is being vengeful from rumors of Tip creepin off? #TMZRUINSRELATIONSHIPS

Once Floyd told T.I to control his b**ch, all hell broke loose’

No punches between the Champ nd T.I were thrown tho! Fight only between entourage. No love lost as Money Mayweather drove off in his new 3rd Bugatti which cost 3 million big ones!