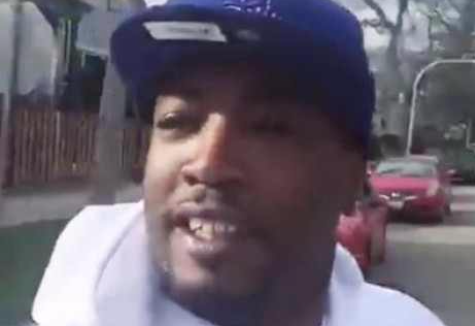 ***WARNING: The video posted with this story is graphic and extremely disturbing, as it shows a shooting happening live. It also contains strong langauge. Viewer discretion is advised.***
You know shit in the Chi getting out of hand when your are trying to capture the momemt of your Hood while on facebook live. Outside a store on 55th and Hoyne in Chicago’s West Englewood neighborhood is where this vivid shooting happened. Who would ever imagine you damn near mentioning seconds is of the essence, then the expected unexpected occurs.

We gotta do better is all we can say as this occurrence is unfortunately typically here in Chi-raq, or naw? Rest In Paradise to this man & that facebook live app.

The gunman hovers, firing several rounds before stepping out of camera range. For several seconds, the only image is a stop sign and clouds rolling by in the sky.

The 31-year-old victim shot at the scene was transported to Mt. Sinai in critical condition, police said. He was undergoing surgery Thursday night.

Police say they are examining the video.

Victim raps Migos – Pipe It Up before shots rang out #smdh