`During popular ATL rap group Migos’ most recent show in Springfield, Mass., a wild brawl broke out in the crowd which was all sparked by one of the members, Offset, jumping off of the stage into the crowd and setting off a fist-flying rumble.

If you watch the video closely, you can see Offset staring into the crowd intently, with his eyes focused on some of the crowd members closest to the stage. It appears as though someone nearby might’ve been yelling some form of disrespectful slurs at him and his crew, which Offset wasn’t too fond of apparently! While everyone else was busy vibing to the music on the stage, including Bobby Shmurda, who was also a featured artist performing at the show, Offset “set it off.”

The Migos member leaped into the air, right at the perfect moment when the camera was able to capture a great freeze-frame image of Offset soaring into the crowd with his right fist already cocked back and ready for impact with his one of the crowd member’s faces. You can even see one of the massive gold rings on his finger as his vicious “Superman Punch” closed in on his target. The impact of his attack was powerful, as it floored his intended target and many others nearby.

Although they were most likely shocked at how quickly Offset pounced on his prey, his loyal Migos crew sprung into action almost immediately to help him out. You can see loads of punches being thrown and some MMA quality grappling taking place during the fight. After a short while the tension subsided and Migos made their way back to the stage and finished performing their song, but shortly after, the venue shut down due to the violence that persevered.

Check out the clip below. What do you think the fan(s) said that made Offset spring into action so quickly and without warning? 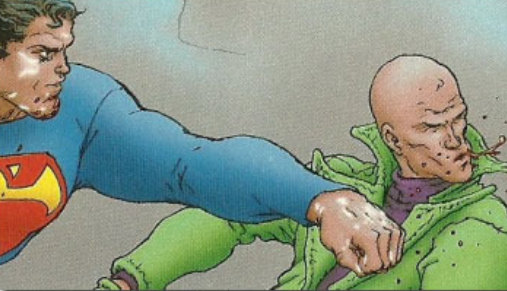 This entry was posted in #SuckerFreeSaturday, Uncategorized. Bookmark the permalink.