Far as getting into a racial debate over this scumbag seems to be a waste of time considering O’REILLY repeatedly made/ makes demeaning statements. Recently bill went on venting as usual offending a whole culture/ African American women. This jerk states “blacks should wear dont get pregnant at 14 shirts“…breathe on nat, let that marinate!

Who tf keep letting this piece of shit vent. What i (@xotheegreat) will say is technically he’s correct, but problem is we (minority society) think he don’t mean well, (sneak dissin?). Fact is no fm out of any race should get pregnant under 18. His choice of words caused of uproar on twitter with the following feedback on his statement! #icantmakethisshitup 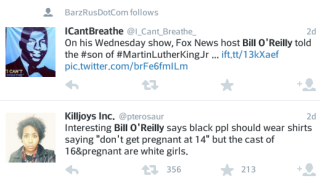 Makes you wonder does the #icantbreathe t-shirts/ campaign make Bill along with plenty of others feel some type of way?, well it should. That doesn’t mean killing the police is the solution either.

This wasn’t the first racist remark Bill has made, and i’m sure it will not be the last as long as he’s able to vent. Despite prior to this incident O’reilly was scrutinized for calling colored people’s hair kinky, he’s still not catching on. After all the harm he has done, who but Beyonce does Bill feels is the fault. Yep, he basically claims B is #partoftheproblem, & her videos sends the black female youths a thotty message.

Powered by: The O’Reilly Factor| smh
Posted by XO 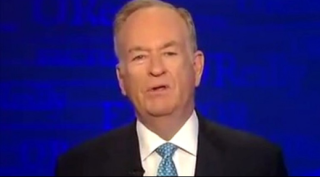